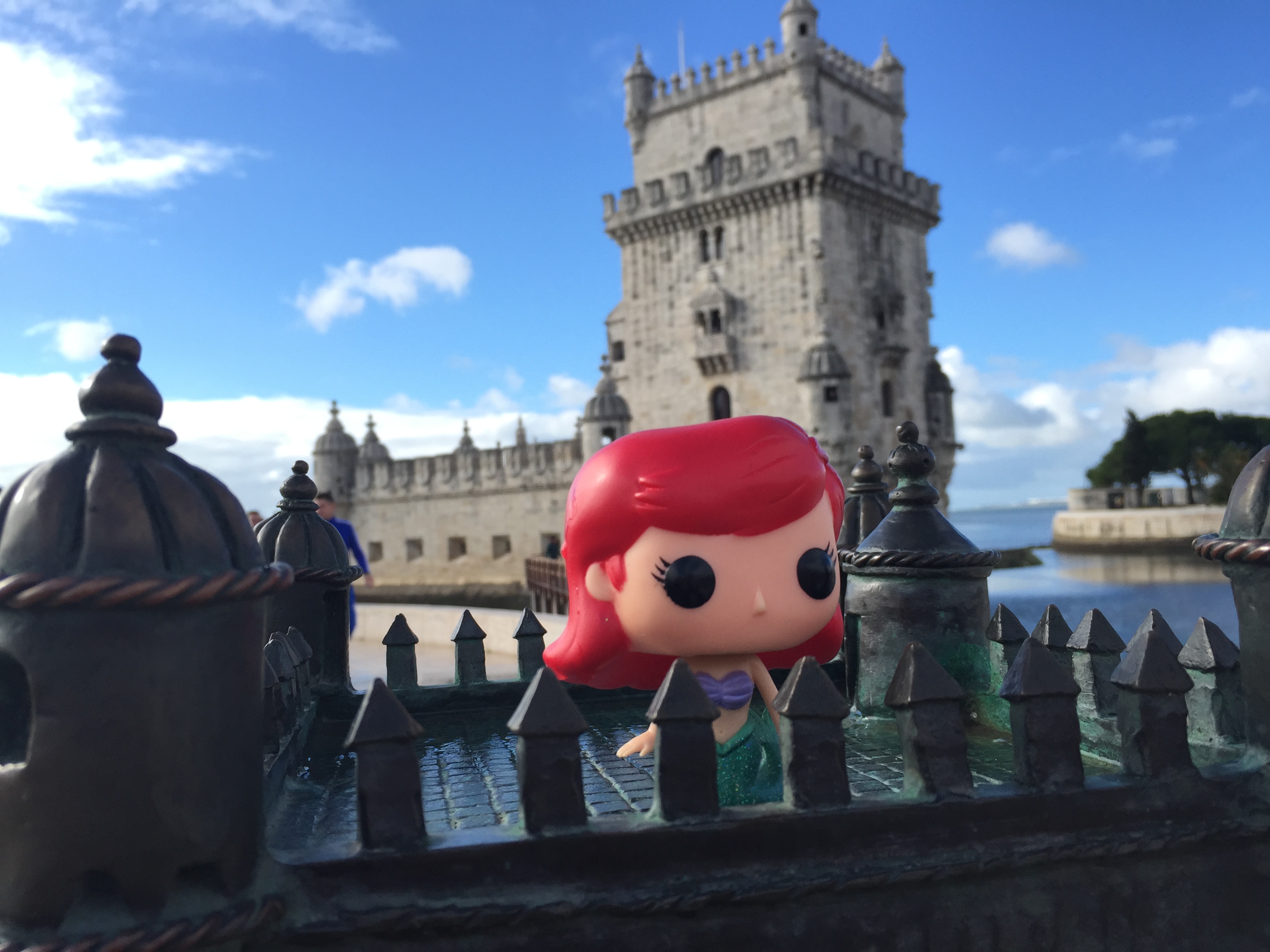 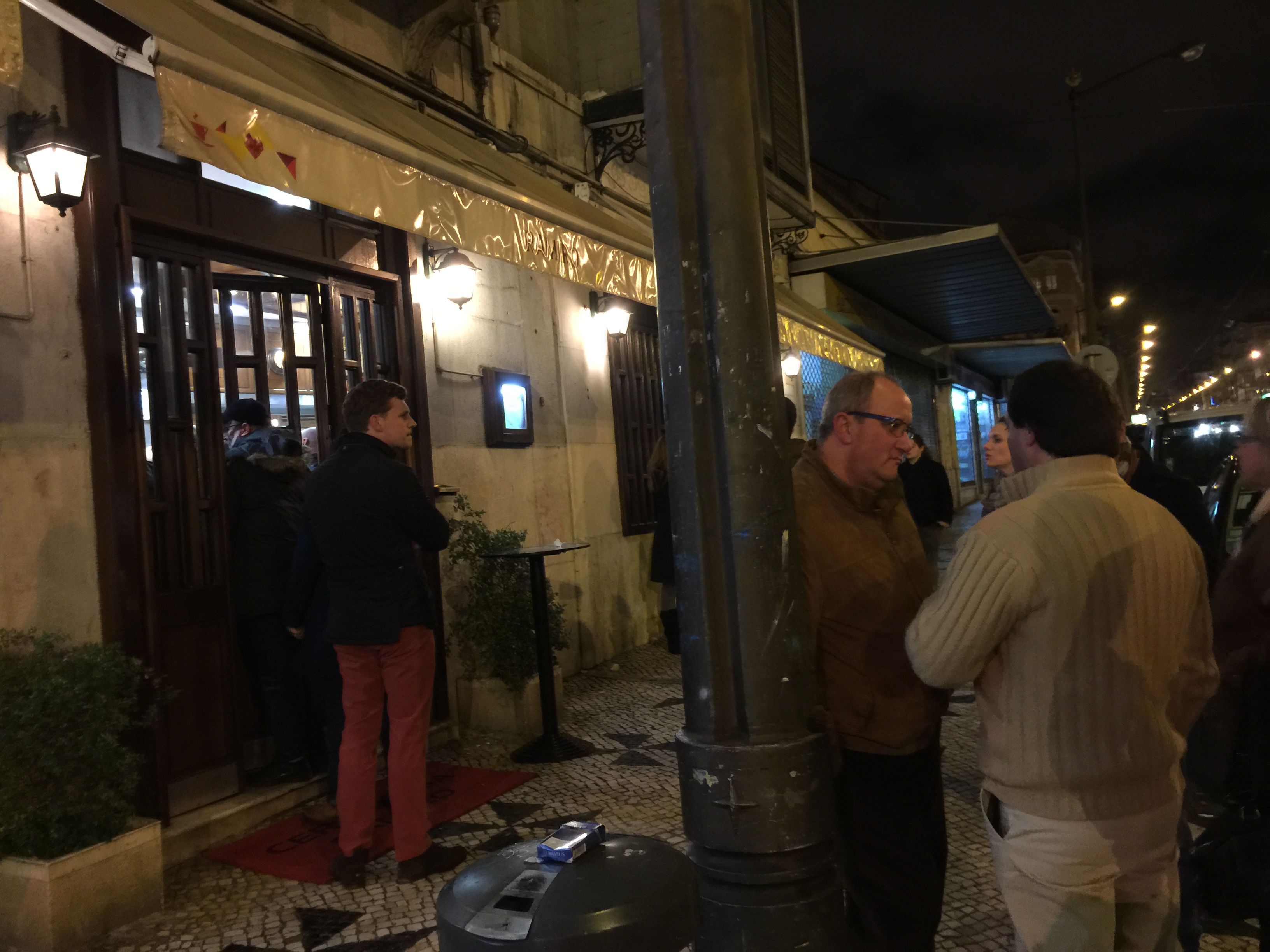 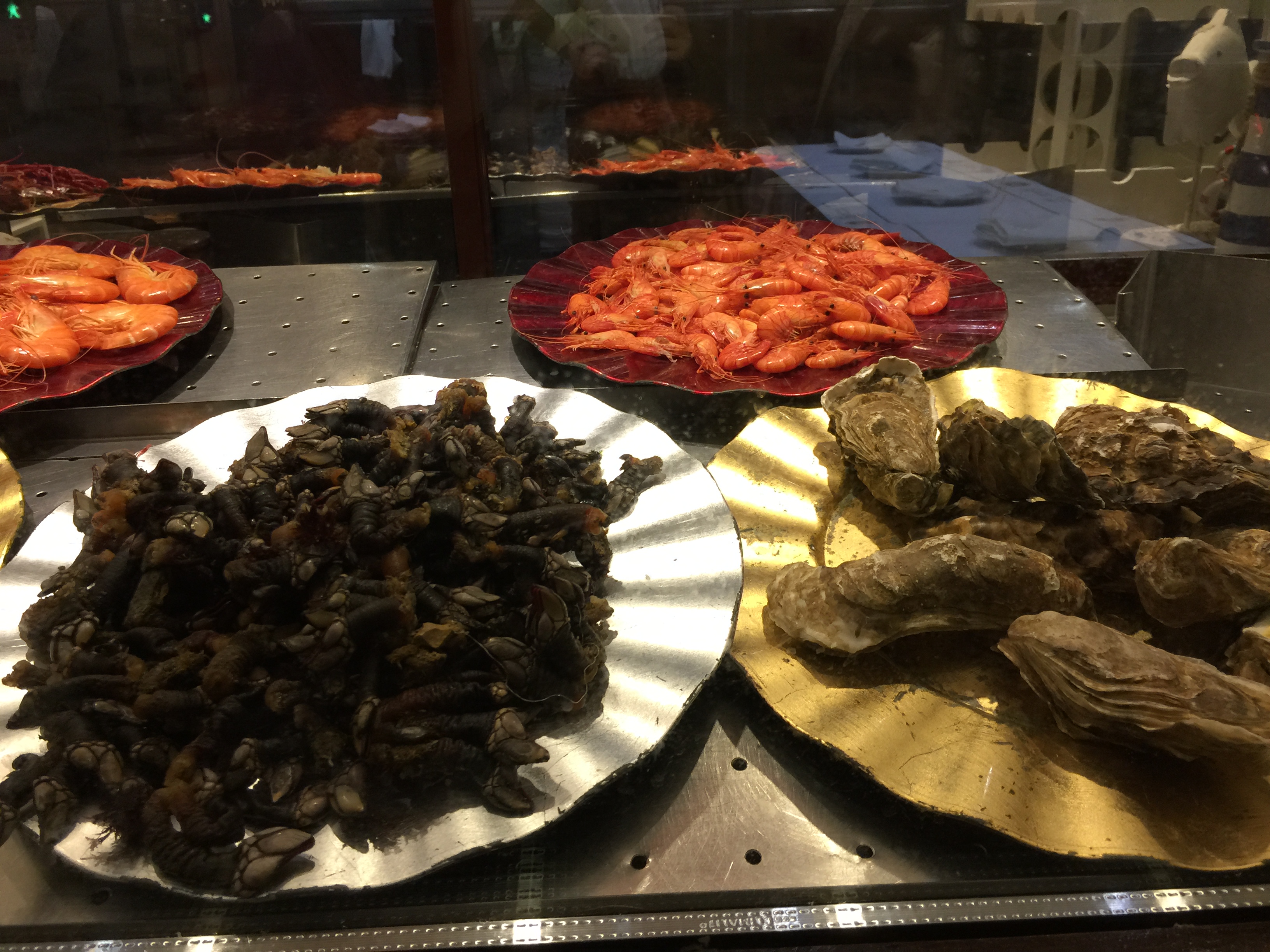 Check out the window display for some appetizers for the eyes

To celebrate our first night in Portugal, my brother instantly treated us to Ramiro as he has heard so much about it from his friends. They usually hold birthday celebrations here. Despite being a 60-year old restaurant, they were quite hi tech as the menus were replaced with iPads. It was cool that I had my brother there because he ordered everything for us in Portuguese. Waiters were quite nice too. By the way, a tidbit. Portuguese people tend to eat VERY LATE dinners. They usually start at 8PM. Sometimes they even eat at 9 or 10… 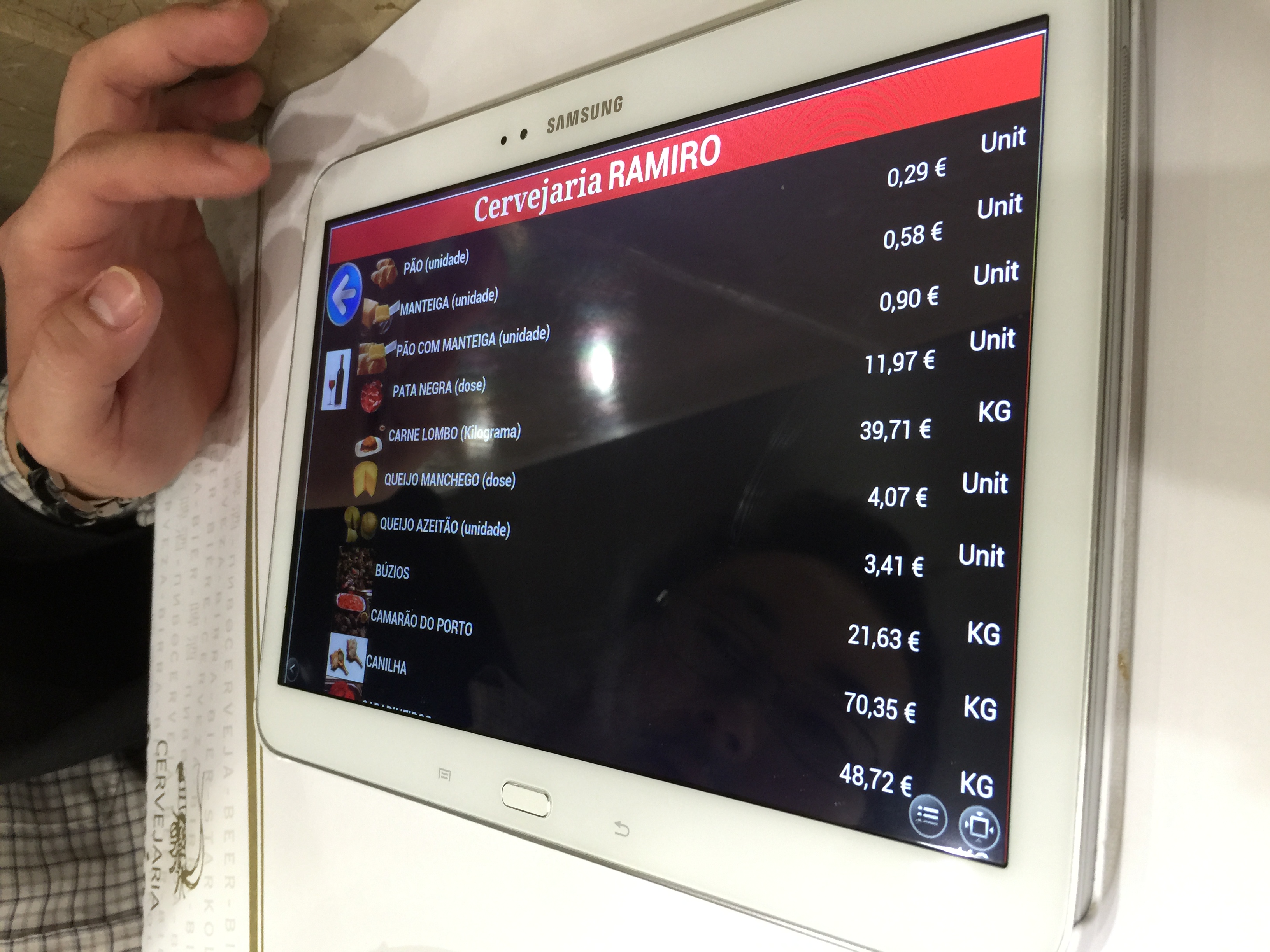 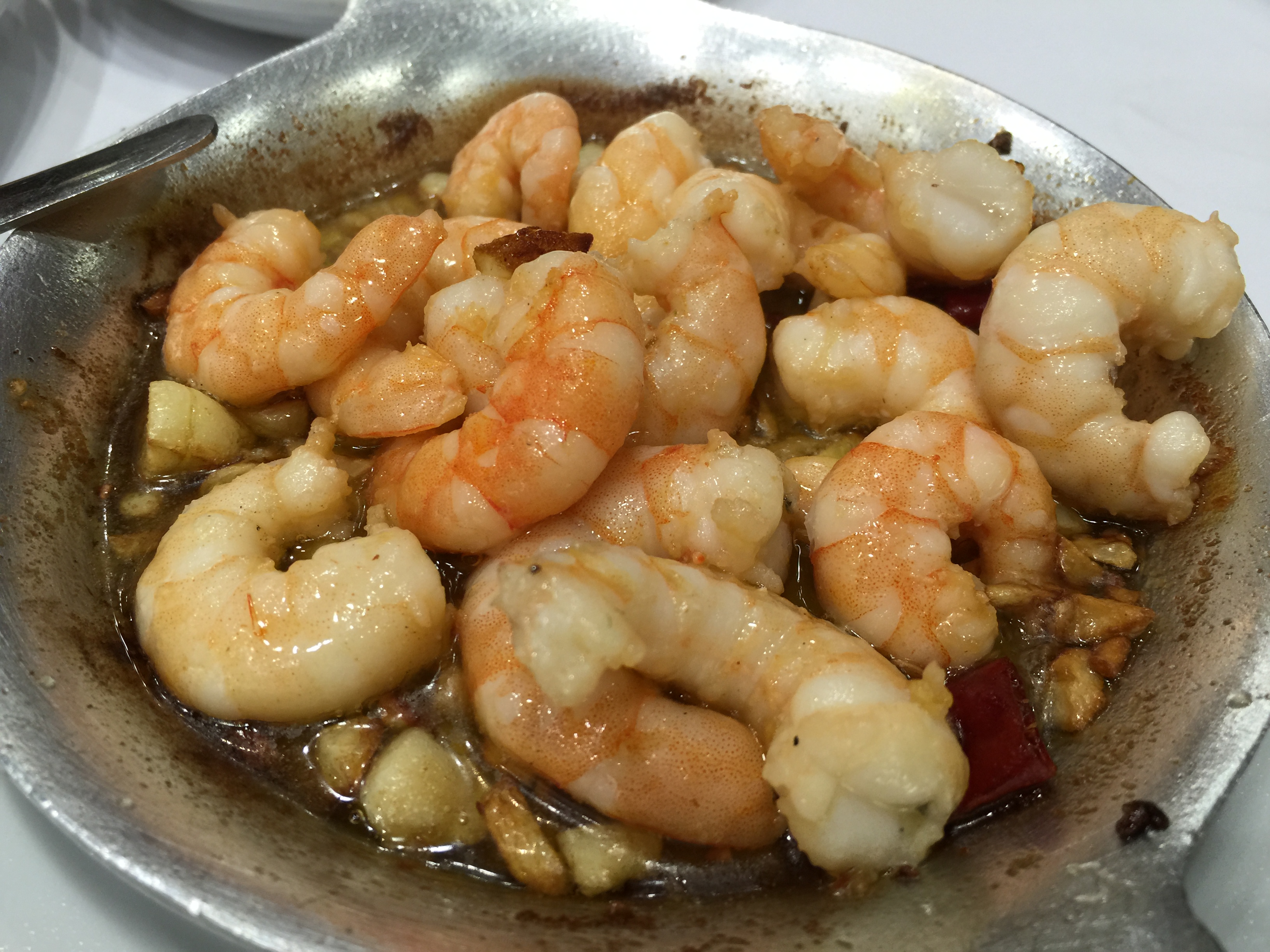 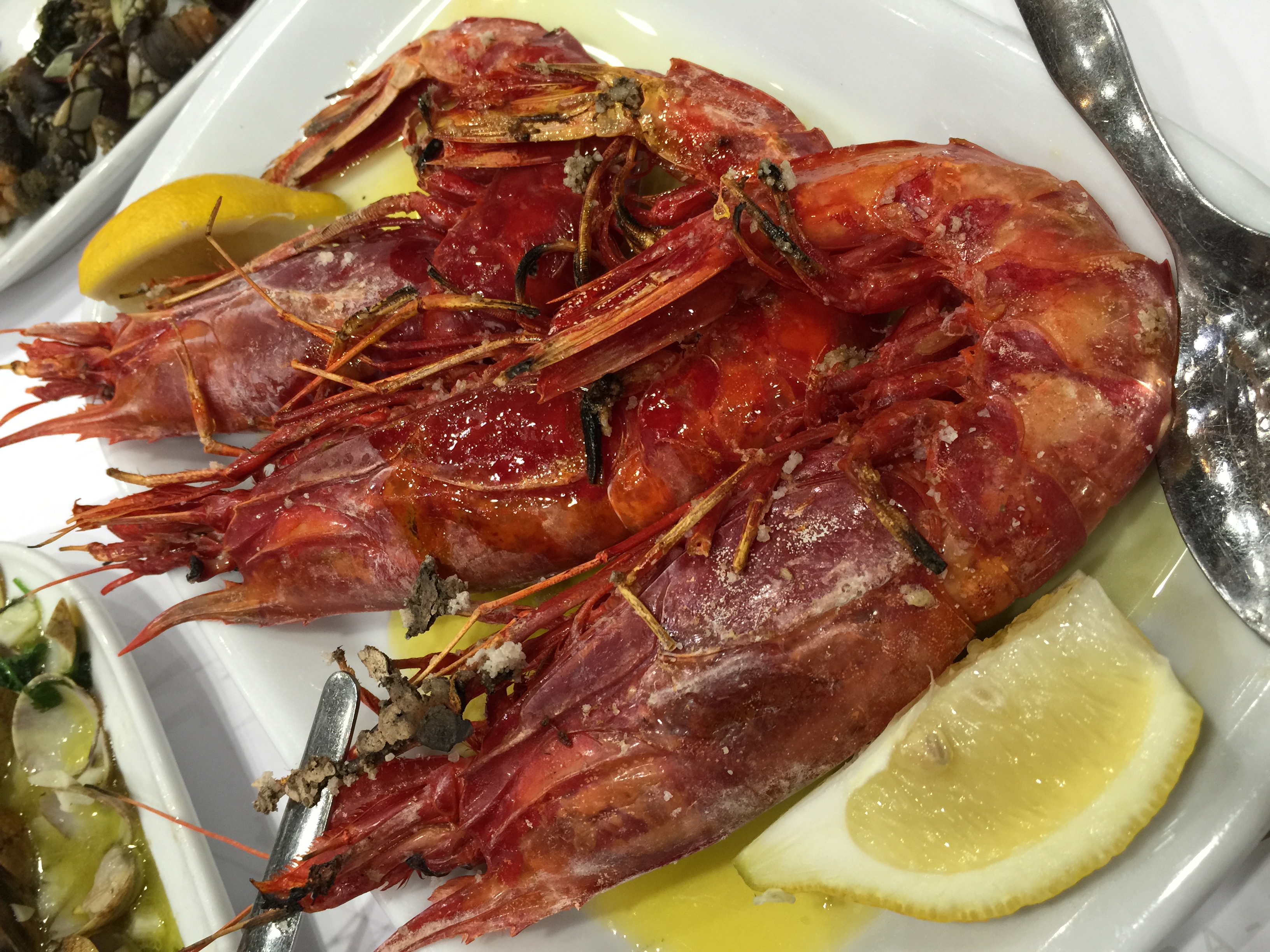 Carabineiro (Scarlet Shrimp) – LOOK AT THESE BABIES! SIMPLY GRILLED WITH SALT AND A HINT OF LEMON AND YOU HAVE THE MOTHER LOAD OF SHRIMP/PRAWNS. This was the pièce de résistance!

Some background of these delicious prawns, scarlet shrimp are large deep-sea prawn species that hail from Eastern Atlantic into the Mediterranean Sea so native only to Portugal, Spain and South Africa. They’re called Scarlet shrimp because of their red color even when they’re alive. When cooked, their color remains the same and their meat fuller than your regular shrimp. They have a distinct and robust flavor which lack in our common shrimp here in the Philippines. AND LOOK AT THAT SIZE. Can the standard size of shrimp be like this?

FYI – Shrimp is my favorite seafood. LOVE THIS. 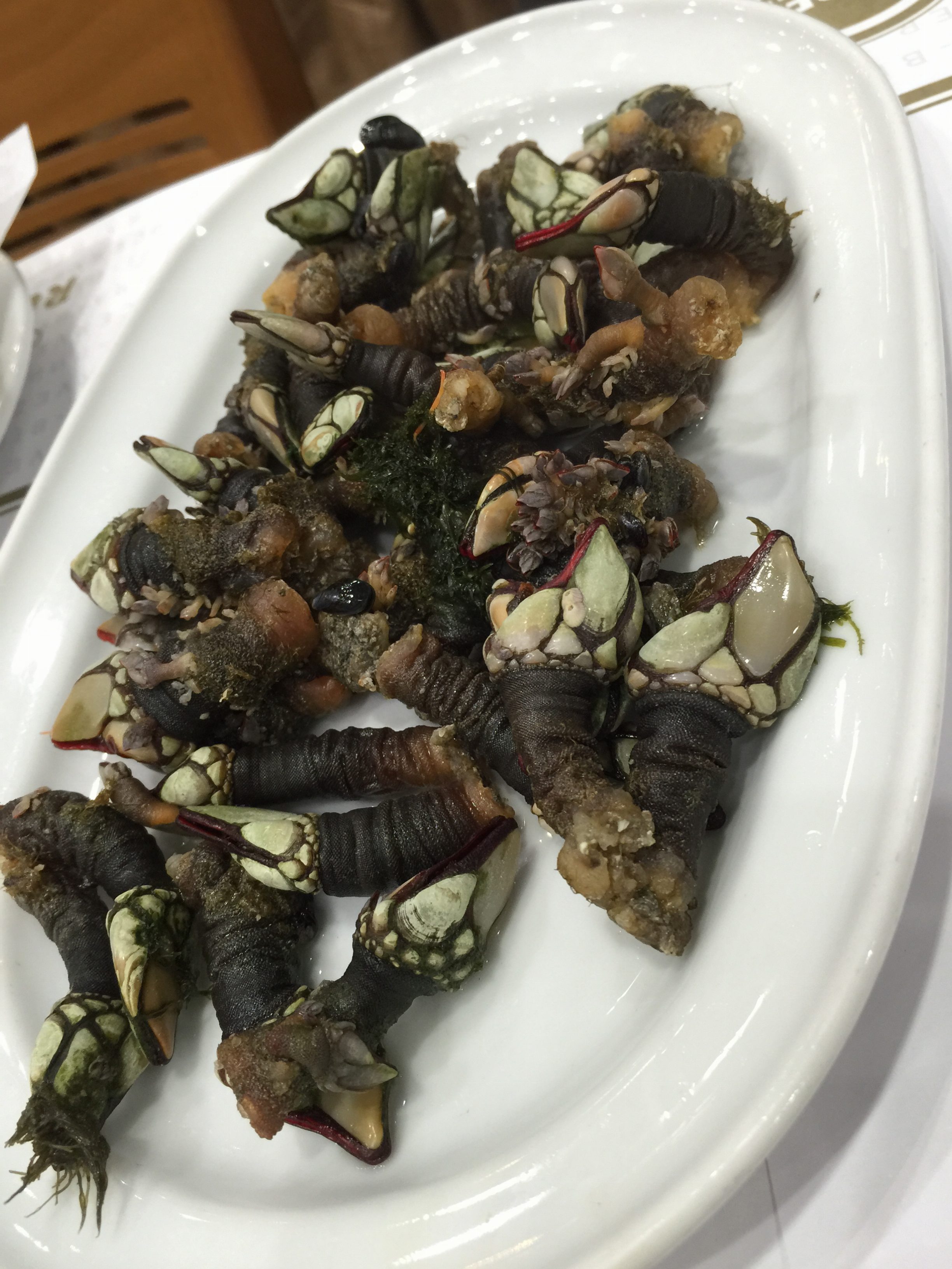 Percebes (Goose Barnacles) – I NEVER THOUGHT I’D BE EATING BARNACLES. I feel like I came from a Sponegbob episode or something.

But people kill for this delicacy which is also native to Portugal & Spain. Getting this is actually dangerous because it involves treacherous climbs over jutting boulders in the ocean. These might not look much but once you peel off the outer shell, you get this yummy texture and gobble everything up in sight. It is wonderful and I thank all those who risked their lives to make this dinner happen. I will eat thee again another day. 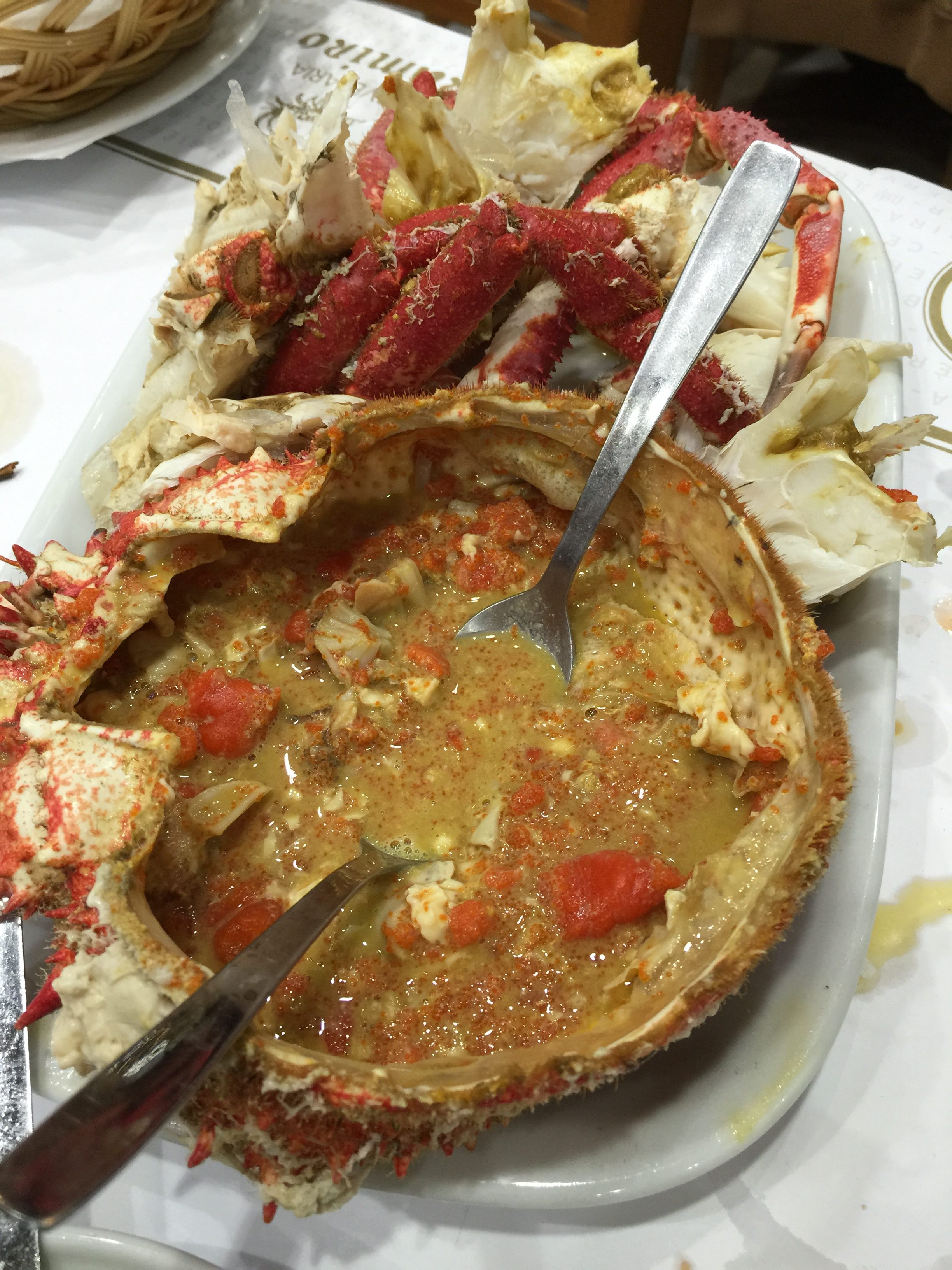 Santola (Crab) – I’m so nitpicky with crabs. You either get it right or you don’t get it at all. There is no in between but… seeing this female crab swimming in her own brain juice and a lot of sauce… I KNEW THAT THEY GOT IT RIGHT! And also when I finally ate it. It’s so GOOD. LIKE GOOD. DELICIOUS. HEAVEN. GAH! What other adjectives can I use? 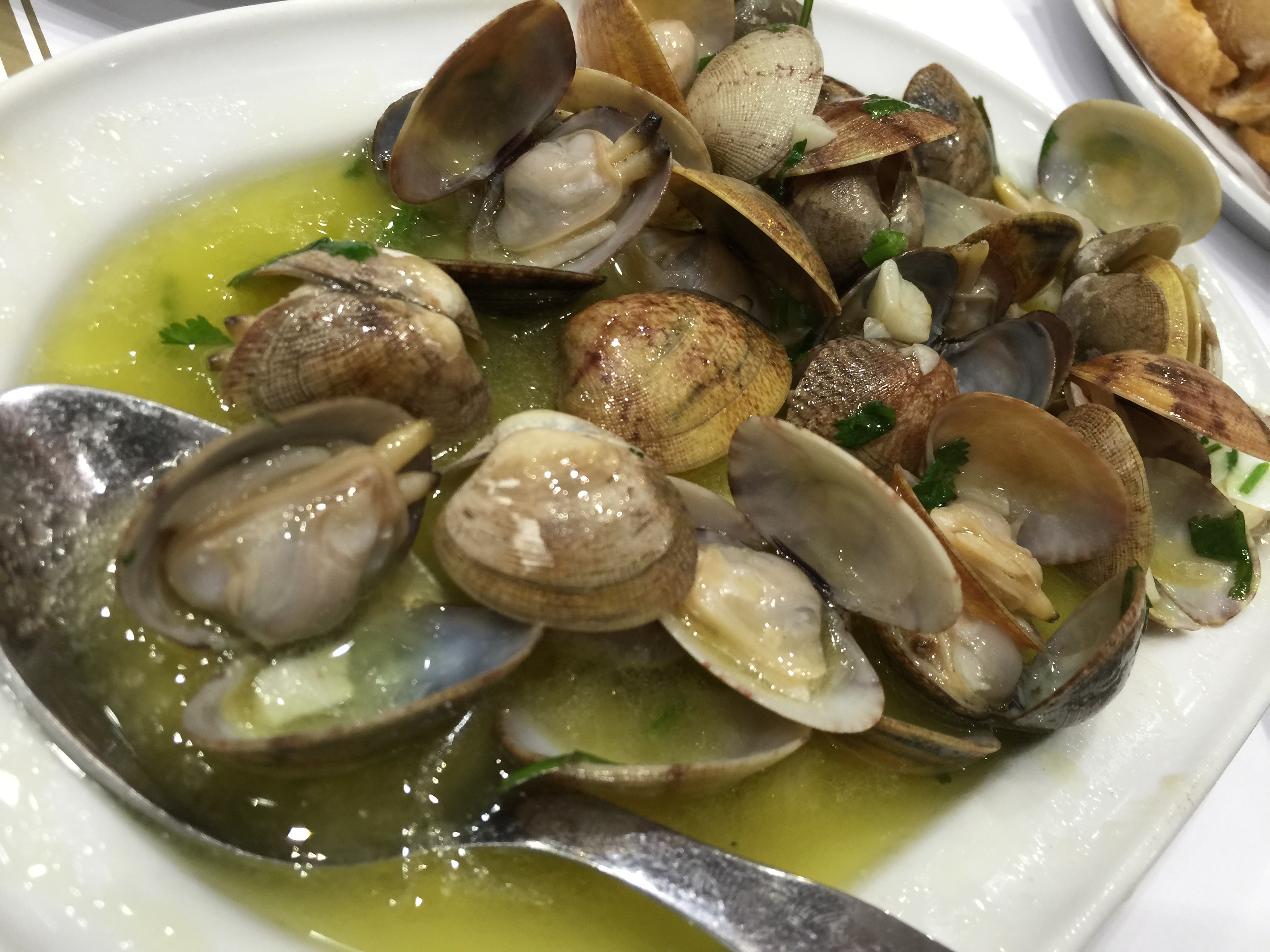 Ameijoas à bulhão pato (Clams) – I loved how simple everything looked and nothing fancy was shown to us. This dish was a pure celebration of the raw goodness of clams. Scrumptious! 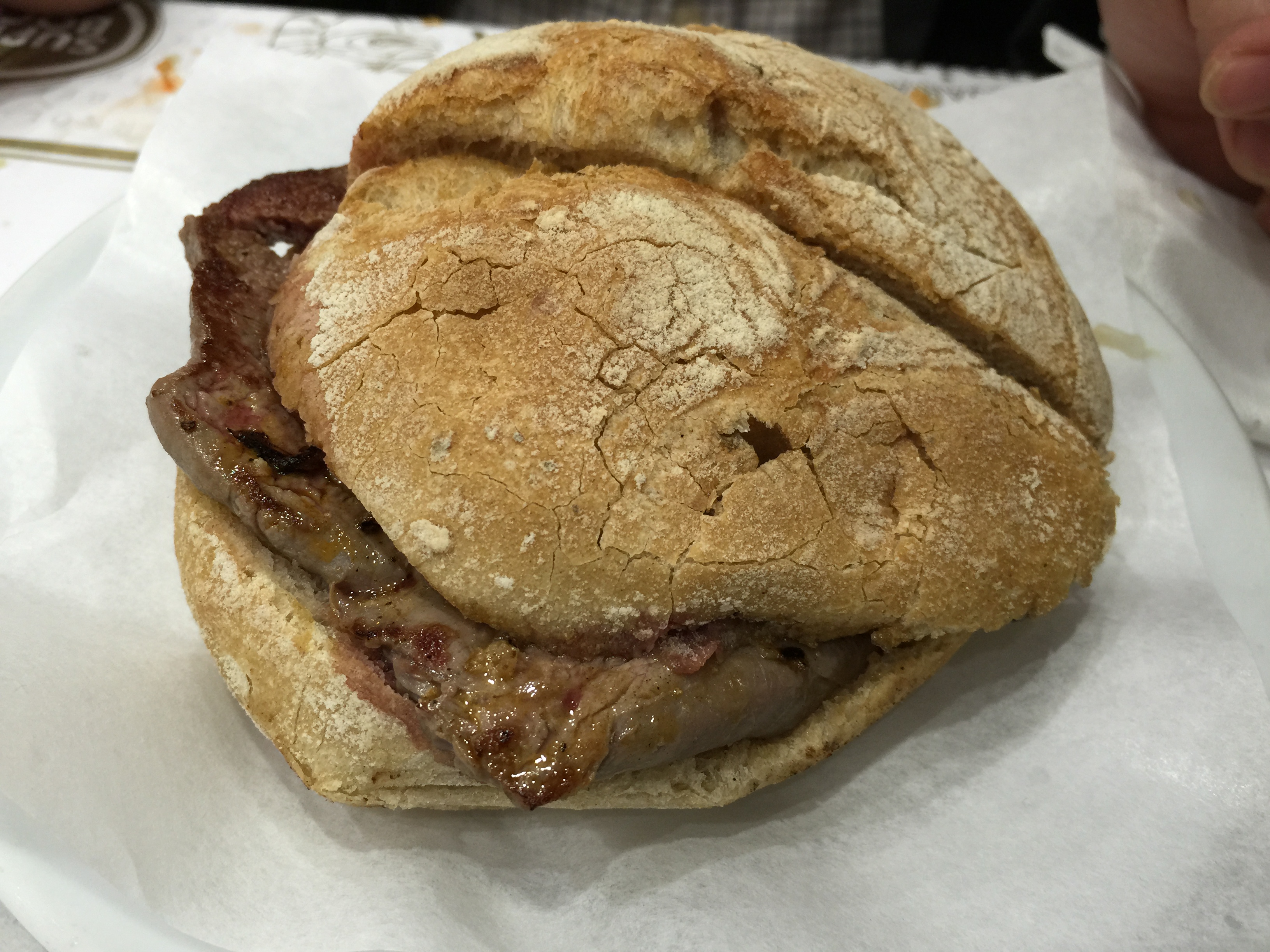 And finally get this, their dessert is called a Prego (STEAK SANDWICH) Because… it is just a steak sandwich. Apparently to complement all the seafood that you’ve eaten and booze that you’ve drank, you gotta taste some meat to absorb it all! And that’s what Ramiro is famous for. It’s probably the oddest dessert I’ve ever had but it is oh so tasty! Wish they could create a steak main course as well. Haha!

Total damage to wallet was roughly around 35 euros per person (minus drinks) which was.. A BARGAIN FOR EUROPE. I mean I thought we would reach 50 per head with all that we ate but Lisbon my dears, is AFFORDABLE!

Their prices are by kilogram. Check their menu here at MunchPunch.

Huge regards to the chefs and owners of Ramiro for creating such a smorgasbord of seafood haven. It’s been more than a year, yet I am still dreaming about this seafood experience and I cannot wait to go back. It gives me so much reason to go back to Lisbon. Thank you so much for the food! 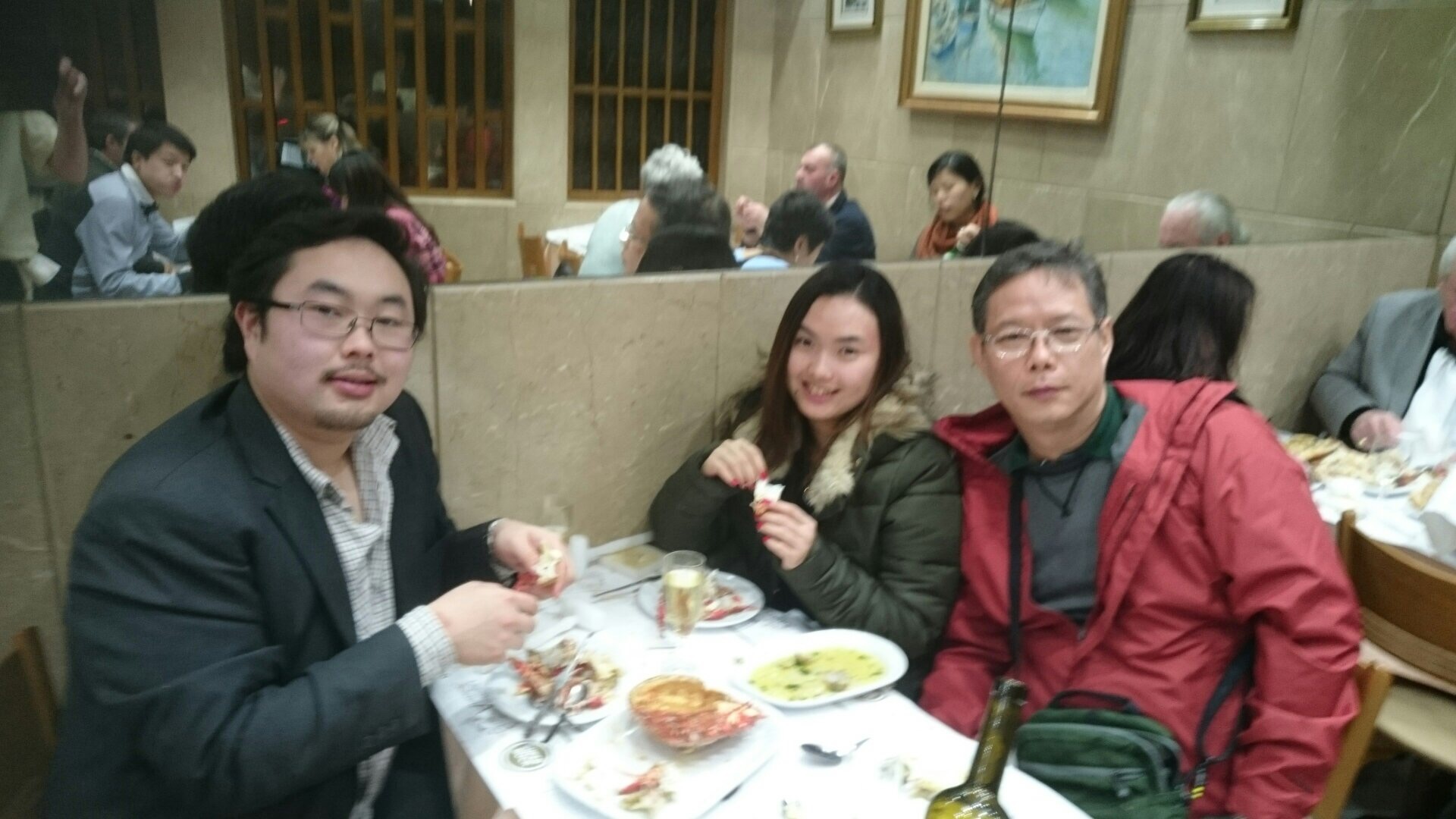